Volunteers are needed on Saturday October 26th to set up the haunted house (for the next day) and also on Sunday beginning at 3pm.  Help on Saturday, then stay for the movie night, which begins at 7pm!

The annual Belwood Halloween Party is Sunday, October 27, from 3 – 6pm at the Cabaña.

Per the Belwood HOA website and the Bellringer newsletter:

Help is needed –  volunteers are sought to help with the games, haunted house actors and others to help with the food & drinks plus setup.  Teenagers can use this as an opportunity to accumulate Community Service hours.

The annual St. Mary’s Country Fair is next weekend, Oct 7 – 9th, 2011 (beginning Friday at 5pm and ending Sunday at 5pm).  It’s always the 2nd weekend in October and is a huge fundraiser for both the school and parish programs. All are welcome!  Free admission, great food, entertainment, dancing on Saturday night to live music and of course rides and activities too. Click on the link above to get more information.

St. Mary’s Catholic Church is located at 219 Bean Avenue in downtown Los Gatos (a block or two in from North Santa Cruz).  The fair can be accessed via Bean or by Lyndon (off of Main).

Summer 2011 is around the corner &  now’s a great time to schedule your enjoyment of the fabulous, free musical venues which are coming our way!  Below please find a compilation of the THREE different Los Gatos free musical concert series!  Hope to see you there! (Info deemed reliable but not guaranteed – please double check the websites prior to going & always read up on the rules – things may have changed.)

http://www.southbayfolks.org/vasona/#psched Performances are held every Saturday in June and July from 5-7pm, on the lawn near the Ranger Office, and just down the hill from the pedestrian entrance at University Ave and Pepper Tree Lane.  Referenced in the list below as VV. Please note that a fee is charged for parking within Vasona.

(3)  Jazz on the Plazz http://www.jazzontheplazz.com/ Wednesday evenings 6:30 to 8:30pm, June 22nd through August 24th. (No blankets on the lawns.) The Los Gatos Town Plaza is on West Main Street and Santa Cruz Avenue near the post office in downtown Los Gatos.  Schedule of who’s playing what: http://www.jazzontheplazz.com/jazz_artists.asp Referenced in the list below as JP.

Schedule of performers, where and when in chronological order for the free musical concert series in Los Gatos:

Los Gatos is a fantastic place in which to live and recreate, but no time more than the summer. Enjoy!

Paving in Belwood of Los Gatos

The following video was shot by my husband, Jim Handy:

For the last week or two, road construction crews have been busy in the Belwood of Los Gatos, Surmont and Belgatos neighborhoods (and other parts of east Los Gatos too). We have received notices on our front porch about road closures, paving dates for various roads and when we can and cannot park on the streets.

As the roadwork began, first the manhole covers were reworked.  That involved removing the paving immediately adjacent to each one, which was a loud job.  Next crosswalks were rubbed out  of existence by a noisy grinding machine, bots dots got scraped away, several stretches of sidewalks and driveways were pulverized into large chunks of concrete (seemed onto to happen where the driveway went over the sidewalk for some reason).

What can you use the Belwood Cabaña for?

Did you know that the Belwood of Los Gatos cabaña can be rented by members for a variety of purposes?

Today (Saturday, August 25) the Leigh High School cheerleaders held a carwash fundraiser in the cabaña parking lot from 9am – 1pm.  My family and I have rented it in the past for parties; most notably we did an 8th grade reunion party there for our son’s class from St. Mary’s Elementary School a year after the kids all graduated. A lot of people rent it for birthday parties and use the large lawn area for the “bounce houses” which are so popular with kids today. 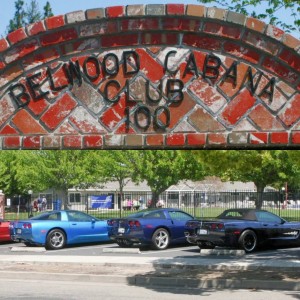 Belwood cabaña collage - auto club met not too long ago - a fun sight!

Having a neighborhood cabaña is a nice plus. It can be a gathering point for folks to meet their neighbors in and around the pool.

In the Surmont, Belgatos, and Belwood neighborhoods, the cabaña is where we vote, it’s where we enjoy the summer bingo & movie on the lawn and where the holiday boutiques are held.

If you’re a member or resident and want to rent out the facility, your go-to person is Gina Wagner, who can be reached at 358-2229. The possibilities are endless!