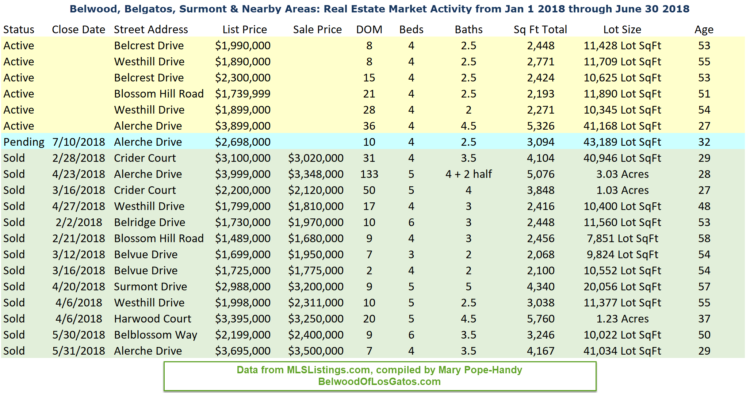 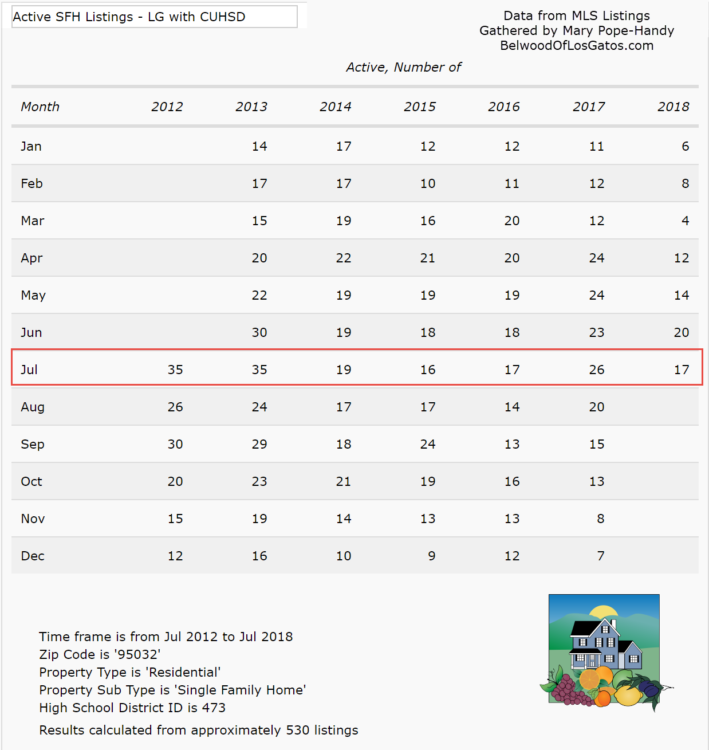 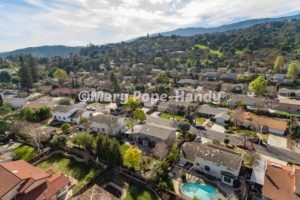 Neighbors often want to see an update on the immediate neighborhood and sale prices of houses that have sold and closed escrow. Here’s a current snapshot of the real estate market in Belwood, Belgatos, and Surmont (and adjacent to the contiguous neighborhood).

View photos and get the details on MLSListings.com here:
http://search.mlslistings.com/Matrix/Public/Portal.aspx?ID=7031825234&L=1

In addition to these closed sales, there are 2 in various stages of “under contract”, and there was 1 duplex sold earlier this year, too.

Interested in buying or selling a home in the area? Please reach out to me with an email or a phone call. 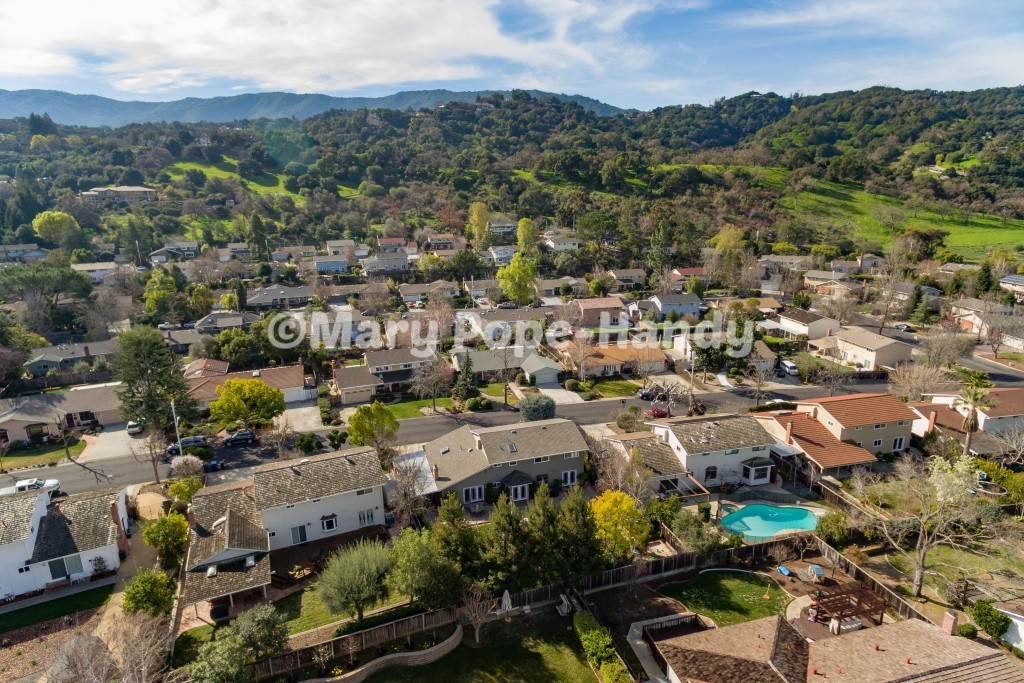 Aerial view of the neighborhood and the nearby foothills

Belwood, Belgatos, and Surmont home sales in 2015 year to date

Of the homes first listed for sale in the Belwood of Los Gatos, Belgatos, or Surmont subdivisions in 2015 so far, only one did not selll (it was pulled off after a month, which is about the time when a price reduction would likely be getting discussed). One other is currently under contract (contingencies are in place) and five homes have been sold and closed. 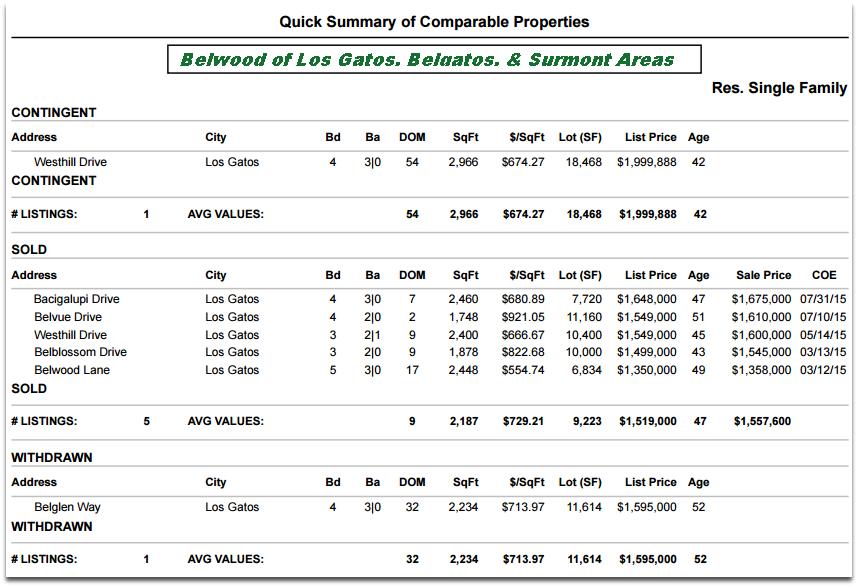 Overall, houses in this neighborhood have gone pending fairly quickly, with the average days on market being a brisk 9 for the five closed sales.  Homes sold so far are all selling over list price, and the average amount over is about 3% ($38,000).

(There was one other closing on Bacigalupi in January from a sale in December that I did not include since I was looking for sales that were ratified in 2015, but that home had 2448 SF and closed at $1,525,000 fyi.)

The odds are good that you could sell a home in this area without too much trouble in most cases.  In every market, though, there are some homes that don’t sell or do not sell quickly.  To learn more about that situation, please visit my Valley of Heart’s Delight blog and read this article:
http://sanjoserealestatelosgatoshomes.com/why-didnt-my-san-jose-home-sell/

Today I’m working on an article for another blog of mine on the topic of saving for a down payment and residential real estate appreciation in Silicon Valley.  Long story short, right now, home buyers cannot save as fast as the home prices are going up.  For some, the saving effort is to get to 20% down or more. For others, the goal is to buy all cash.  In both cases, though, the danger is getting priced out of the market while the would-be home owner is putting away money.  For people who wanted to buy 2 years ago but decided to wait and save, that now means either not buying at all or buying in less nice home or area than they were targeting.

This is certainly true for home buyers wanting to get into Belwood of Los Gatos and nearby.  Let’s look at our corner of Los Gatos and take a sampling of what has happened since 2000 (a “boom year”) for a typical 2400 square foot house on a typical 9,000 to appx 10,000 square foot lot (in Belwood, Belgatos or Surmont).  For this, we will consider homes sold in 2000 and homes sold within the last 12 months.  I ran the numbers this afternoon on MLS Listings, our local multiple listing service provider.

Fast forward to today and the last 12 months leading up to today – approximately 15 years later.

Home prices have almost doubled in that time. END_OF_DOCUMENT_TOKEN_TO_BE_REPLACED

This afternoon I ran the recent listings and sales in the Belwood of Los Gatos, Belgatos, Surmont and nearby areas.  These contiguous east Los Gatos neighborhoods have extremely low turnover, so not surprisingly, there are few sales!!

It should be noted that larger homes on larger lots usually sell for far less on a price per square foot basis – so it’s not really fair to compare a house on an acre with one sitting on a 10,000 sf lot. Additionally, homes in the $2 million plus range are a very different creature than those closer to $1 million in terms of multiple offers and the sale price to list price ratio.  In some cases, though, even these higher end homes get multiple offers and sell for more than the asking price.

Finally, the type in the image below is a little small, but if you click on it, you will get a larger, more readable version. 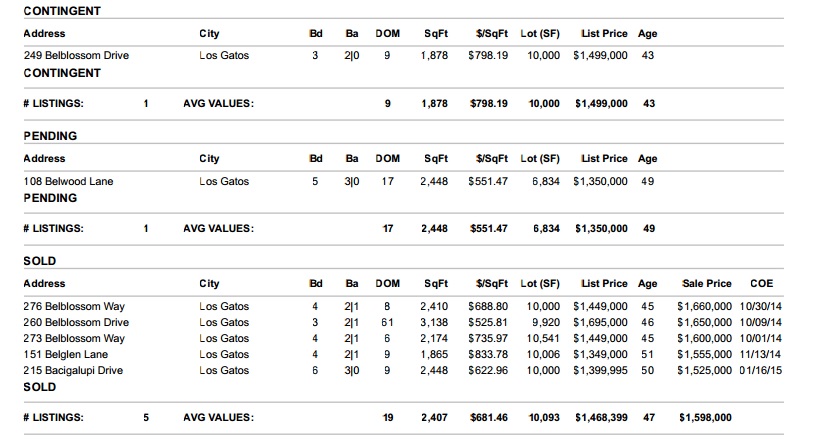 Belwood, Belgatos, Surmont and nearby sales year to date

Real estate sales this year in the east Los Gatos areas including Surmont, Belgatos, Belwood of Los Gatos and homes close to Harwood but within the Los Gatos town boundaries have been small in number due to the extraordinarily tight inventory levels.  Below are the closed and pending sales as reported in the MLS for this calendar year so far.

Of the nine closed sales, 5 sold for more than list price – most or all of these were multiple offer situations.  The other four had a variety of situations: one was bank owned, one needed several hundred thousand in finishing work (there was no kitchen, there were no bathrooms, etc.).  The one on Alerche sold “off market” and “off mls”.

Interested in buying or selling a home in or near this pretty corner of Los Gatos?  Please give me a call or send me an email today!